From AIDS to Ebola to Smallpox, viruses continue to evolve and affect our lives. This collection is offers a discounted price and launching off point to discover related articles National Geographic has published over the years.

Be the first to review “Pandemic Collection” Cancel reply 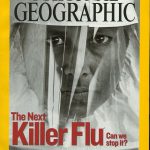