A Century of Research and Exploration { Understanding Our World}
Projects funded by the Committee for Research and Exploration enrich and enthrall.
The Aran Islands: Ancient Hearts, Modern Minds
Some 1, 400 Gaelic speakers hold down a fortress of tradition off the west coast of Ireland.
The Anasazi { The Old Ones of the Southwest}
As archaeologists penetrate the mysteries of the ancient Anasazi, new questions arise.
Trout { A Passion for Trout}
The quest for these denizens of cold clear water is more than sport: It’s a way of life.
China’s Buddhist Caves { Pilgrimage to China’s Buddhist Caves}
Centuries- old images of devotion grace caverns along China’s Silk Road.
Storming the Tower
Using hands, feet, and nerve, four Wyoming cowboys scale 3, 000- foot Trango Tower in the Himalaya.
Jerusalem { The Three Faces of Jerusalem}
Holy to Jews, Christians, and Muslims, this storied city struggles to balance religion, politics, and power.

Be the first to review “National Geographic April 1996” Cancel reply 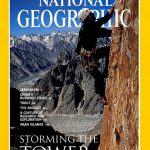