Home to the Enduring Berkshires
A fifth- generation Berkshire man shares the wild beauty and history of the ancient hills rising between the New York State border and the Connecticut River of western Massachusetts.
Voyage to the Planets
With the knowledge gained from American and Soviet deep- space probes, the Geographic’s award- winning science writer and a Czech artist take an imaginary journey through our solar system and provide detailed descriptions of each planet.
Teeming Life of a Pond
A biologist photographs wildlife of Noxontown Pond, a damned marsh near Middletown, Delaware.
Solar Eclipse, Nature’s Super Spectacular
Astronomers report on an expedition to a village in southern Mexico where they recorded the dramatic alignment of a total eclipse.
From Amazon to Spanish Main: Colombia { Colombia, from Amazon to Spanish Main}
The economy of South America’s fourth largest nation encompasses modern textile mills, coffee plantations, traditional salt harvests, and the construction of a trans- Andean oil pipeline.

Be the first to review “National Geographic August 1970” Cancel reply 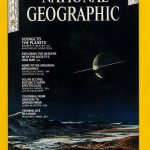