Eighty years after Robert E. Peary announced his historic achievement, doubts still linger about his claim to have reached the North Pole. In order to put the controversy to rest, the National Geographic Society has commissioned the Navigation Foundation to conduct a thorough examination of Peary’s expedition.

When the supertanker Exxon Valdez ran aground in March 1989, it spilled an unprecedented 11 million gallons of crude oil into the waters of Prince William Sound. Some feared that the damage would be irreversible, but Bryan Hodgson looks at the long-term effects of the worst oil spill in US history and the prospects for the area’s recovery.

Join Jon Thompson and photographer Cary Wolinsky as they gain access to previously off-limits corridors of the Kremlin, tracing its history from a 12th century fort to the grand palace of Soviet government and ceremony. The article features a photographic portfolio of the opulent art and architecture of the Kremlin.

The Kremlin and Its Treasures

An in-depth look at the Kremlin, featuring a new map series that utilizes vivid three-dimensional paintings to showcase the latest discoveries from decades of seafloor exploration.

Dance of the Electronic Bee

A cutting-edge technology has been developed in the form of a tiny robot honeybee, controlled by a computer and able to communicate with living bees to inform them of distant sources of nectar. The robot can even provide a sample of sugar water as proof of its findings. The article includes photographs and text by Mark W.

Be the first to review “National Geographic January 1990” Cancel reply 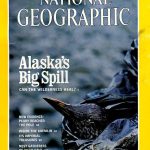