Ramses the Great
Egypt’s most celebrated pharaoh, Ramses II held power for 66 years, leaving behind gigantic monuments to himself from the Nile Delta to Abu Simbel.
The Sphinx Revealed { Computer Rebuilds the Ancient Sphinx}
With high- tech imaging and historical detective work, experts re- create the appearance of the enigmatic Egyptian colossus in the days of Ramses II.
The World’s Food Supply at Risk
Genetically uniform plants with high yields are susceptible to large- scale crop failure. Scientists race to rescue wild relatives that could save the food supply of the future.
Falcon Rescue
More and more peregrines soar over California, but are they out of danger? Eggs with thin shells and high toxin levels in adult birds lead biologists to take a closer look.
A Season in the Minors
Winning fans to its homespun joys and sorrows, minor- league baseball enjoys a comeback, reaffirming the sport as one of America’s national pastimes.
Spain’s Extremadura { Extremadura: Cradle of Conquerors}
The harsh rangeland of western Spain, whose conquistadores set out for the New World 500 years ago, struggles to keep today’s youth at home and traditions intact.

Be the first to review “National Geographic April 1991” Cancel reply 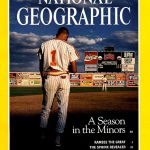