Kashmir: Trapped in Conflict
India, Pakistan, and Kashmiri separatists continue their increasingly dangerous struggle over Himalayan territory that once delighted residents and travelers alike.
Around At Last!
In March of this year, Swiss doctor Bertrand Piccard and British balloon instructor Brian Jones became the first balloonists to circle the globe nonstop. In an exclusive account, Piccard describes their journey.
Galileo Mission { In the Court of King Jupiter}
NASA’s once troubled Jupiter spacecraft captures astounding images of the king of planets and its intriguing moons.
Masai Initiation { Masai Passage to Manhood}
In an elaborate, emotional ceremony Africa’s Masai elevate warriors to the status of elders.
Olive Oil, Elixir of the Gods
The world is discovering what Mediterranean peoples have known for millennia: The salubrious oil of the olive is an essential ingredient of the good life.
Preserving Sahara Art { Preserving the Sahara’s Art; Preserving the Sahara’s Prehistoric Art}
Researchers make a cast of monumental giraffes carved into desert stone 7, 000 years ago in Niger.
Rodeos- -Behind the Chutes
Getting bruised and broken more for love than money, cowboys ride broncs, wrestle steers, and otherwise get their kicks at dirt rings across the U. S. and Canada.
Hunting With Eagles { Mongolian Eagle Hunters; In the Mountains of Mongolia: Hunting With Eagles}
On the high plateau of western Mongolia, ethnic Kazakhs practice a centuries- old tradition.

Be the first to review “National Geographic September 1999” Cancel reply 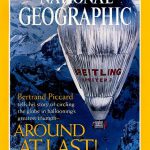