Australia’s Monsoon { Monsoon Madness; Monsoon Watch in Australia; The Wet Down Under}
Monsoon Madness When it rains it pours in Australia’s north- ern outback. The steamy, temper- testing buildup to the wet has locals and visitors alike going troppo. BY ROFF SMITH PHOTOGRAPHS BY RANDY OLSON
Into the Maya Underworld { Descent Into the Maya Underworld}
Into the Maya Underworld Mesoamerican farmers still per- form ancient rituals in sacred caves- portals to the place of fright. BY DAVID ROBERTS PHOTOGRAPHS BY STEPHEN L. ALVAREZ
Fiji’s Rainbow Reefs
Fiji’s Rainbow Reefs In the South Pacific a spectacular reef system takes an environmental walloping and lives to tell the tale. Scientists are listening closely. BY LES KAUFMAN PHOTOGRAPHS BY TIM LAMAN
Darwin’s Big Idea { Was Darwin Wrong? }
Darwin’s Big Idea The work of the 19th- century English naturalist shocked society and revolutionized science. How well has it withstood the test of time? BY DAVID QUAMMEN PHOTOGRAPHS BY ROBERT CLARK
ZipUSA: Nature’s Lessons at 7, 000 Feet { ZipUSA: 83011; ZipUSA: Kelly, Wyoming}
ZipUSA: 83011 At Teton Science Schools, kids learn where the wild things are: right outside their cabin door. BY MARGARET G. ZACKOWITZ
Sloth Bears { Nose to Nose With Sloth Bears}
Nose to Nose With Sloth Bears You may recognize them as India’s exploited dancing bears. In the wild, though, these shaggy insectivores can be ferociously antisocial. BY JOHN L. ELIOT PHOTOGRAPHS BY K. YOGANAND
The Geography of Terror { In Focus: World of Terror}
The Geography of Terror Terrorism is as old as humankind. Where are the hot spots, and why is it so much more lethal today? BY WALTER LAQUEUR SPECIAL: MAP OF THE WORLD

Be the first to review “National Geographic November 2004” Cancel reply 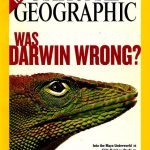