ZipUSA: 68010 Boys Town, NE { ZipUSA: A Town of Their Own; ZipUSA: Boys Town, Nebraska}
ZipUSA: Boys Town, Nebraska Give them homes, schools, families, and some old- fashioned religion, and troubled kids might just pull themselves together. This is their place. BY JENNIFER STEINBERG PHOTOGRAPHS BY LANDON NORDEMAN
Gelada Monkeys: Where Queens Are King { Kings of the Hill? }
Kings of the Hill? In a male- dominated world, a female- run society is decidedly refreshing. Check out gelada monkeys- but don’t mess with the queens: They bite. BY VIRGINIA MORELL PHOTOGRAPHS BY MICHAEL NICHOLS
Special Report: Weapons of Mass Destruction { Weapons of Mass Destruction: Spreading Scourge; Weapons of Mass Destruction}
Weapons of Mass Destruction They redefined warfare in the 20th century and could redefine civilization itself in the 21st. A closer look at the ugly legacy of nuclear, chemical, and biological weapons- and their unimaginable threat. BY LEWIS M. SIMONS PH
Megacities: The Coming Urban World { Cities}
Megacities By 2030, two out of three people will live in an urban world, with most of the explosive growth occurring in developing countries. For a preview of the future, the last in the Challenges for Humanity series explores Sao Paulo, Brazil; Lagos, N
Holy Mola! The Colossal Sunfish { Mola! ; It’s a Mola}
Mola! A swimming head, a pizza pie with eyes, a platter of para- sites- that’s a mola, the colossal fish that has at least one researcher wrapped around its little fin. BY JENNIFER STEINBERG PHOTOGRAPHS BY MIKE JOHNSON
Unmasking Skin
Unmasking Skin Equal parts armor, air- conditioning system, and genetic heritage, skin is more than skin- deep. Scientists are prob- ing beneath the surface of the body’s largest organ. BY JOEL L. SWERDLOW PHOTOGRAPHS BY SARAH LEEN

Be the first to review “National Geographic November 2002” Cancel reply 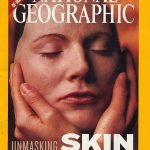