Pakistan, New Nation in an Old Land: Carved out of Ancient India, the World’s Most Populous Moslem Country Celebrates its First Five Busy Years
Pakistan celebrates its first five years as an independent nation. Formerly part of British India, the Muslim state was formed because of basic differences between the Hindu and Muslim populations.
The Jungle Was My Home: To a Lone Adventurer Hunting Jaguars with a Spear, the Years Bring a North American Wife and a Jungle- reared Family
The author describes the life he and his family led in the jungles of Mato Grasso, Brazil, surrounded by exotic animals and natives.
Our Navy’s Long Submarine Arm: Snorkel- equipped Prowlers Bring a New Era, and the Atomic Sub Now Being Built Promises a Far Greater Undersea Revolution
Advances in submarine warfare continue after World War II. A new atomic- powered submarine, the U. S. S. Nautilus, is expected to be able to travel farther and stay submerged longer than any other undersea vessel.
From Sagebrush to Roses on the Columbia
A new irrigation project in the Columbia River Basin will turn former desert into blooming farmland.
Marineland, Florida’s Giant Fish Bowl
Marineland is more than just a giant aquarium. It is scientifically designed to replicate marine life in the open sea, giving tourists and scientists alike a chance to observe the drama of undersea life.

Be the first to review “National Geographic November 1952” Cancel reply 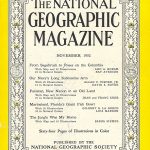