Windjamming Around New England
The crew of the Nomad spent three weeks sailing around the New England coast. Although they sail the same route every summer, there is something to be discovered anew on each voyage.
St. Helena: the Forgotten Island
Best- known for being the place of Napoleon’s imprisonment, this island is equidistant from Africa and South America. Home to just under 5, 000 people, much of their income comes from the sale of postage stamps to collectors.
Porcupines, Rambling Pincushions
Porcupines can be entertaining pets and companions in spite of their quills. However, domestic and wild animals often run afoul of an irate porcupine.
Switzerland Guards the Roof of Europe
Free of the devastation of war for over 100 years, this small democracy has managed to transform itself from an agricultural society to a stable industrial power.
A Stroll to London
In 1737, Helen Walker walked barefoot from Edinburgh to London. Over 200 years later, the author retraces Walker’s trek, experiencing a 500- mile cross section of British history and literature.

Be the first to review “National Geographic August 1950” Cancel reply 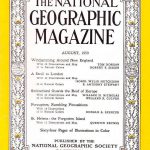