Ants and Plants- -Friends and Foes
In return for sustenance, ants pollinate and guard plants. But when ants ravage crucial nutrients, plants retaliate. Rarely captured images illustrate relationships both symbiotic and hostile.
The Caspian Sea { The Rise and Fall of the Caspian Sea}
Five countries now ring the Caspian, where two stood only a decade ago. The Soviet Union’s breakup left regional economies in tatters
The Missouri Breaks
In the river- gouged plains of eastern Montana folks tough as branding irons find community – – when they want it.
[ Whydah] Pirates { Pirates of the [ Whydah] }
Survivors swore the Whydah was packed with plunder when a nor’ easter swamped her off Cape Cod in 1717. Now salvagers searching for the loot have hit archaeological gold: artifacts offering a treasure trove of insights into the lives of pirates.
Africa’s Wild Dogs
Dogs? Not really. Wild? Definitely. Only distantly related to any of the world’s other canids, these bush hunters live in sociable packs but suffer a bloodthirsty reputation.
From Fins to Feet { The Rise of Life on Earth: From Fins to Feet}
Did ancient fish haul themselves ashore on fins that later became limbs? Probably not, according to new discoveries suggesting that the legs animals use to walk on land originated in the Devonian period for life in the water.

Be the first to review “National Geographic May 1999” Cancel reply 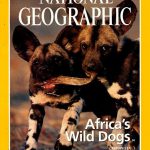