The Enigma of Time
While most of us are obsessed with keeping track of it, scholars debate what time actually is. John Boslough and photographer Bruce Dale tell the story of a concept that we think we understand until we try to define it.
Siberia: In from the Cold
Like a warming wind, glasnost – – openness – – sweeps across the Soviet Union’s vast outback, and Siberians in unprecedented numbers speak out against the misuse of their rich storehouse of natural resources. From journalists to reindeer herders to loca
The Gulag Remembered
From 1928 to 1953 Joseph Stalin sent millions to Soviet labor camps, where millions perished. Mike Edwards describes the brutal system, known by its Russian acronym gulag, and speaks to survivors.
Last Days of the Gulag?
As the Soviets dismantle their notorious correctional labor camps and open their prison system to greater scrutiny by the world, French writer Jean- Pierre Vaudon and photographer Pierre Perrin visit Perm 35, a camp in the Ural Mountains.
America’s Ancient Skywatchers
Strange drawings on a desert floor, oddly aligned stone columns, a peculiar trough carved beneath a small window. .. what do they mean? John B. Carlson, a specialist who weds archaeology to astronomy, looks to the cosmos for answers to some age- old puzz
The Golden Hoard of Bactria
After a decade of excavating on Afghan hillsides, Soviet archaeologist Viktor Ivanovich Sarianidi in 1978 unearthed a trove of gold jewelry and other artifacts buried in 2, 000- year- old graves. Here he presents a selection of these masterpieces. With p

Be the first to review “National Geographic March 1990” Cancel reply 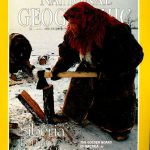