Long Distance Runners: Mexico’s Tarahumaras { The Tarahumaras: Mexico’s Long Distance Runners}
James Norman and David Hiser explore the strange half- lost world of the Tarahumaras, whose idea of sport is to kick a wooden ball day and night, sometimes for as much as 200 miles.
Life Ashore Beckons the Sea Gypsies { Sea Gypsies of the Philippines: Life Ashore Beckons the Bajaus}
The boat- dwelling Bajaus have come to a momentous crossroads: give up their wandering ways or continue to live with scant education, medical care, or respect from settled neighbors. By Anne de Henning Singh and Raghubir Singh.
Spain’s Sun- blest Pleasure Isles
Over the centuries, the Balearics have survived one conquest after another. Ethel A. Starbird and James A. Sugar find them happily weathering one more assault: myriad holiday seekers, armed with dollars, pounds, francs, and marks.
Should They Build a Fence Around Montana?
Mike W. Edwards and Nicholas deVore III look at the land of big sky at a critical moment, when staggering riches beneath the surface must be weighed against a more subtle kind of wealth – – open space and the right to enjoy it.
A Sunken Japanese Fleet Becomes a Scientific Laboratory: Truk Lagoon { Life Springs From Death in Truk Lagoon}
World War II turned an idyllic Pacific harbor into a flaming hell when U. S. Navy bombers sank some 60 Japanese vessels. Studying this sunken fleet more than a quarter of a century later, biologist Sylvia A. Earle and photographer Al Giddings find a uniq

Be the first to review “National Geographic May 1976” Cancel reply 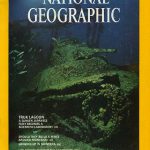