Shanghai: Where China’s Past and Future Meet
Communist leaders long denigrated China’s largest city for its onetime tole as the Paris of the Orient. Now they invite foreign firms in hopes of making the city the financial capital of Asia.
High Road to Hunza
In the mountains of northern Pakistan, Hunzakuts find more rewards than drawbacks in the highway that has opened their once isolated Shangri- la to the outside world.
U. S. Eighth Air Force: The Wings of War { The Wings of War}
The men of the U. S. Eighth Air Force battled Nazi Germany from five miles up, flying daytime bombing raids from England. Aboard B- 17s they forged history – – and lifelong friendships.
Trinidad and Tobago { The Wild Mix of Trinidad and Tobago}
Oil- rich and multiethnic, this two- island Caribbean nation makes an art of enjoying friends and family. Carnival, the yearly extravaganza of the senses, raises that art to its highest form.

Be the first to review “National Geographic March 1994” Cancel reply 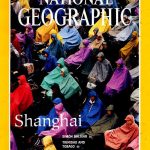