The March Toward Extinction { What Caused Earth’s Great Dyings? ; Extinctions}
Since life began on this planet, at least five worldwide catastrophes have erased millions of animal species – – and a sixth is under way. Rick Gore and photographer Jonathan Blair report the latest findings on these extinctions – – evidence of climatic
Malta Changes Again { Malta: The Passion of Freedom}
Under foreign rule for centuries, this Mediterranean island nation reflects a past patterned by Phoenicians, Carthaginians, Arabs, Knights of St. John, and the British. Now celebrating 25 years of independence, Malta takes a neutral stance in today’s un
Computer Images: The New Creation { Images for the Computer Age}
Author- photographer Fred Ward flies a jet fighter, peers into the human brain, and chuckles at the antics of an animated cartoon character to show us how computer graphics make impossible visions possible.
At Home with Tibetan Nomads { The Remote World of Tibet’s Nomads}
On a bleak, windswept plateau in western China, one of the last great nomadic societies on earth survives as herders of yaks, sheep, and goats. Living for 16 months with these Tibetan nomads – – who endured years of forced settlement in communes – – anth
Life in a Nutshell
Most acorns don’t grow up to be mighty oaks. The reason: A host of creatures invade the shell for food and shelter. Zoologist and photographer Mark W. Moffett take a close look.

Be the first to review “National Geographic June 1989” Cancel reply 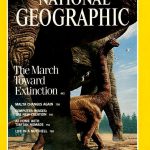