Hope for the Bluebird { Song of Hope for the Bluebird}
Home- built nesting boxes can lessen a threat of extinction for the harbinger of happiness. Lawrence Zeleny and Michael L. Smith chronicle a two- nation effort to save a bird.
The Hallowed Isle, Mont Saint Michel { Mont Saint Michel}
Kenneth MacLeish and Cotton Coulson portray the glory of a sea- girt French monastery raised in honor of the archangel Michael.
South Africa’s Lonely Ordeal
An island of white rule in a sea of black, South Africa tries to come to grips with rising demands for racial equality. William S. Ellis and James P. Blair assess its progress.
Loch Ness: The Lake and the Legend
Does a monster really lurk in those moody Scottish waters? William S. Ellis describes the continuing search for Nessie, as photographers Emory Kristof and David Doubilet try out some sophisticated gadgetry.
A Way of Life Called Maine
More problems. .. than we rightly need – – newcomers, Indian land claims, limping local economies – – fail to dull the zest and humor of the Down Easters, as captured by Ethel A. Starbird and photographer David Hiser.
People of Myth and Magic { The Huichols, Mexico’s People of Myth and Magic}
Deep in Mexico’s mountains, Huichol Indians give James Norman and Guillermo Aldana E. a glimpse of a world where reality blurs.

Be the first to review “National Geographic June 1977” Cancel reply 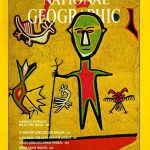