Orissa, Past and Promise in an Indian State
A region of rice growers, Orissa is rural India in microcosm. National planners seek to graft science to traditional crafts and ancient farming practices.
Lone Sailor Completes His Globe- girdling Voyage { Robin Sails Home: On the Final Leg of His Five- year Voyage Alone Around the World}
After a month with his bride on Barbados, a youthful skipper crosses the Caribbean, motors through the Panama Canal, visits the Galapagos, and sails home to California, completing an almost five- year 30, 600- nautical- mile solo circumnavigation of the
Canada’s Heartland, the Prairie Provinces
Canada’s fastest growing cities enrich Manitoba, Alberta, and Saskatchewan a hundred years after they came under the Canadian flag.
Growing Up With Snowflake
For three years the author, a primatologist, has studied Snowflake, the world’s only known white gorilla and the star attraction at the Barcelona Zoo.
World War I Aircraft Fly Again in Rhinebeck’s Rickety Rendezvous
An aerodrome in New York’s Hudson River Valley hosts aerial re- enactors dressed in the uniforms of British, German, and American airmen who fight mock battles in restored craft.

Be the first to review “National Geographic October 1970” Cancel reply 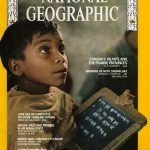