Hiking the Backbone of the Rockies { High Trail Through the Canadian Rockies; Canada’s Great Divide Trail: Hiking the Backbone of the Rockies}
Backpackers find unparalleled views of weathered peaks and skittish wildlife along a long- distance trail on the border of British Columbia and Alberta.
Skull 1470: Discovery in Kenya of the Earliest Suggestion of the Genus [ Homo] — Nearly Three Million Years Old- -Compels a Rethinking of Mankind’s Pedigree
An anthropologist discovers a Homo fossil, nearly three million years old, beside Lake Rudolf in Kenya.
Australia’s Great Barrier Reef
In this picture portfolio, marine dramas unfold on a coral stage off eastern Australia.
Life Cycle of a Coral { First Color Record of the Life Cycle of a Coral}
A staff photographer makes the first color record of the life of the carnivorous animal known as coral.
Whatever Happened to TVA?
Controversy surrounded the creation of the Tennessee Valley Authority in the 1930s, but harnessing a great river has given an economic boost to the region.
Exploring Australia’s Coral Jungle
The Great Barrier Reef reveals its riches – – from algae to scorpionfish – – to dedicated divers.

Be the first to review “National Geographic June 1973” Cancel reply 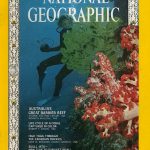