A Place for Parks in the New South Africa
Conservationists in South Africa hope to preserve a balance between the nation’s magnificent wildlife and a rapidly expanding human population desperate for land.
Syria Behind the Mask
A key to Middle East peace, this arid nation – – no longer under Soviet sway – – has begun to loosen its grip on the economic and political activities of its people.
Treasure From the Silver Bank { Gleaning Treasure From the Silver Bank}
Submerged since 1641, a hoard of gold, silver, and jewelry from the Spanish galleon Concepcion comes to light off the Dominican Republic.
Dinosaurs of the Gobi: Unearthing a Fossil Trove
Buried by desert sandstorms 80 million years ago, wondrous creatures reveal themselves in well- preserved fossils of parents and nestlings.
Let the Games Begin
What drives us to play. A look at sports on the 100th anniversary of the modern Olympics.

Be the first to review “National Geographic July 1996” Cancel reply 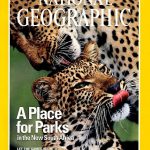