Thor Heyerdahl’s Own Story of [ Ra II] { The Voyage of [ Ra II] }
The author sailed and drifted across the Atlantic in a ship crafted of papyrus reeds like those of ancient Egypt, suggesting that the Old World may have reached the New World in antiquity.
[ Deepstar] Explores the Ocean Floor
Off Florida’s Gulf Coast, San Diego, Yucatan, and New York, the author rides a mini- sub as deep as 4, 000 feet and collects photographic trophies of organisms surviving in the inky darkness.
Java- -Eden in Transition
Political and cultural center of Indonesia and home to 80, 000, 000 people, the island of Java is plagued by financial disarray and a low standard of living.
On the Track of the West’s Wild Horses
Descendants of Spanish imports, an estimated 17, 000 wild horses survive on public lands of the American west. Observing bands in southern Nevada, the author talks about what others are doing to protect them.
Housewife at the End of the World
An American schoolteacher who married into a ranch family in Tierra del Fuego describes the way of life at the southern tip of Argentina.
The Lower Keys, Florida’s Out Islands
Life is relaxed along the world’s longest ocean- hopping highway, which joins the tiny limestone and coral islands of South Florida.

Be the first to review “National Geographic January 1971” Cancel reply 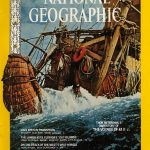