Our Life on a Border Kibbutz
The authors, from Arizona, share a year and way of life with Israelis at Kibbutz Ha On, a communal farm settlement on the Israeli border of Syria and Jordan.
Diving Into the Blue Holes of the Bahamas
An adventurous diver explores the deep pits off Andros Island, where unusually strong currents often run counter to the tides.
New Mexico: The Golden Land
Three rich cultures – – Spanish, Indian, and Anglo – – come together in an exciting melange in the fifth largest U. S. state.
The Faeroes, Isles of Maybe
People of these Danish islands proudly recall Norwegian ancestors and still speak a language related to western Norwegian and Icelandic.
The Cobra, India’s Good Snake
For centuries, Indians have feared and revered the large venomous serpent as a symbol of fertility. Author Harry Miller lives in Madras, where he keeps a colony of cobras penned in his yard.

Be the first to review “National Geographic September 1970” Cancel reply 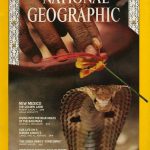