An Arctic Breakthrough
Scientists are evaluating secret polar data, newly released by the U. S. and Russia in a farsighted act of bilateral cooperation.
Lichens: More Than Meets the Eye
Among the world’s oldest organisms, lichens provide food, medicine, rainbow- hued dyes, and even monitor air quality.
The Dawn of Humans: The First Steps
A wealth of fossil finds in Africa draws us closer to answers about when, where, and why our earliest ancestors first stood upright.
Siberian Tigers
Russian and American researchers join forces to try to save the world’s biggest cat.
Under New York
An incredible maze of water mains, transit tunnels, sewer pipes, and power cables girds the core of the Big Apple.
Sons of Genghis Khan { The Great Khans: Sons of Genghis}
Heirs of the great Mongol warrior set out to conquer the world and nearly succeeded, forging the largest land empire in history.

Be the first to review “National Geographic February 1997” Cancel reply 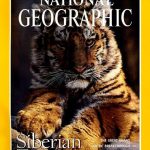