Castles and Progress in Portugal
Alongside war- torn Spain, Portugal is rising out of economic depression, forging new roads, building schools and ports, and rejuvenating its hilly capital, Lisbon.
The Rise and Fall of Nanking
Like a phoenix rising from the ashes, the Chinese city of Nanking ( Nanjing) , on the Yangtze River, has recovered from near annihilation many times in its long history.
The Incas: Empire Builders of the Andes
Peru’s oldest city, Cuzco, is the site of the ancient capital of the Inca Empire, which thrived in the fertile valleys of the Andes.

Be the first to review “National Geographic February 1938” Cancel reply 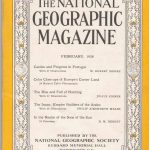