A Round Trip to Davy Jones’s Locker: Peering into Mysteries a Quarter Mile Down in the Open Sea, by Means of the Bathysphere
After a series of refinements and tests, two scientists complete a dive in a vehicle capable of sustained deep- sea exploration, transmitting their observations to the surface by telephone.
The Timeless Arans: The Workaday World Lies Beyond the Horizon of Three Rocky Islets Off the Irish Coast
On land scarcely 18 square miles in total area, the people of the Aran Islands maintain a quiet, traditional way of life even as their population dwindles due to emigration.
The Trans- Asiatic Expedition Starts
The Citroen automobile team that crossed Africa in the 1920’s regroups for an Asian adventure – – 15, 000 miles round- trip – – with cars designed to overcome heavy grades and high altitudes.
Coronation Days in Addis Ababa
A festive mood and ancient rituals surround the coronation of Ethiopia’s emperor.
Modern Ethiopia: Haile Selassie the First, Formerly Ras Tafari, Succeeds to the World’s Oldest Continuously Sovereign Throne
Red and gold cloak Ethiopia’s Lion of the Tribe of Judah in an elaborate ceremony attended by dignitaries from around the world.

Be the first to review “National Geographic June 1931” Cancel reply 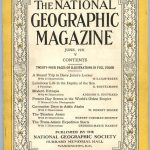