Illinois- -Healthy Heart of the Nation: All America Mingles in the Prairie State, Industrial and Farming Titan Rich in Coal, Oil- -and Mighty Chicago
The Prairie State offers something for everyone, from farmer to industrial titan to city sophisticate.
Jericho Gives Up Its Secrets: Beneath a House in Earth’s Most Ancient Town, Scientists Discover a Family Group of 7, 000- year- old Portraits
Archaeological excavations at Jericho have uncovered a group of seven portrait heads dating from the Neolithic era, as well as evidence of Roman and biblical inhabitants.
Fifty Years of Flight
This photo essay shows the evolution of aircraft and pilots.
Fact Finding for Tomorrow’s Planes: A Little Fan- in- a- box Wind Tunnel Made Possible the Wrights’ First Flight; Now Screaming Supersonic Winds Test Weird Shapes of Aeronautical Things to Come
Aviation research has progressed a long way since the Wright brothers made a wind tunnel using a fan in a box. The future promises to be even more exciting.
Aviation Looks Ahead on Its 50th Birthday: Now a Billion- dollar Business, Airlines Plan Jet Transports, Fast Freighters, and Downtow Helicopter Ports
December 17, 1953, marks the 50th anniversary of the Wright brothers’ flight at Kitty Hawk. The billion- dollar aviation business looks ahead to faster planes carrying more cargo on longer flights.
Ontario, Pivot of Canada’s Power: Cities Burgeon, Pastures Sprout Factories, Forests and Mines Give Up Their Wealth in the Great Midland Province
Ontario, the second largest and most populous Canadian province, is the seat of national government and the center of Canadian industry.

Be the first to review “National Geographic December 1953” Cancel reply 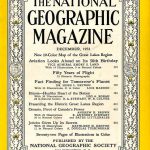