Mountains Top Off New England
The backbone of New England, mountains run north from western Connecticut and Massachusetts through Vermont and New Hampshire, into Maine. As New Englanders love to remind, these mountains are much older than the Rockies of the West.
Saving Earth’s Oldest Living Things
Preservation efforts are under way to protect the centuries- old giant sequoias of California.
Flamingos’ Last Stand on Andros Island
The population of flamingos on Andros Island in the British Bahamas becomes extinct, due to low- flying aircraft and marauding egg hunters.
I Walked Some Irish Miles
The author spent eight weeks walking through the counties of Cork, Kerry, and Galway, where the Irish language is still spoken and ancient traditions prevail.
A Journey to Little Tibet
Ladakh, the eastern part of the state of Jammu and Kashmir, is culturally a part of Tibet. The author and her family took a two- month journey through this remote land on horseback.
Torchbearers of the Twilight
The many varieties of fireflies help scientists understand how to chemically create cold light.

Be the first to review “National Geographic May 1951” Cancel reply 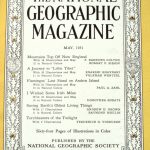