Sea Birds of Isla Raza
This little island in the Gulf of California is so small, it doesn’t appear on most maps. Thousands of seabirds know it’s there, however, and call it home.
Yugoslavia, Between East and West
Tito’s Yugoslavia combines Slavic peoples, four main languages, and three major religions into one nation walking a political tightrope between communist countries to the east and western democracies.
With the Nuba Hillmen of Kordofan
Life as a British diplomat in the hill country of Sudan’s Tegale district, offers the author many opportunities to become acquainted with native life and culture.
American Processional: History on Canvas
On the 150th anniversary of the founding of Washington, D. C. , the Corcoran Gallery presents a collection of 311 paintings depicting the progress of American history from colonial times to the present.
Flags of the United Nations
This article presents color representations and histories of all the members’ national flags of the United Nations.

Be the first to review “National Geographic February 1951” Cancel reply 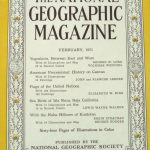