National Geographic Photographers { Reel to Real}
Do any of our photographers resemble the hero of The Bridges of Madison County? The men and women who shoot for the Geographic separate fact from fiction.
Sicily: Italy Apart
Long dismissed as country cousins by mainland Italians, Sicilians are demanding change and crying Basta! – – Enough! to corrupt politicians and the Mafia.
North American Bats { Saving North America’s Bats; Saving North America’s Beleaguered Bats}
To save these benign, insect- eating mammals, conservationists create sanctuaries in mines and caves.
The African Roots of Voodoo
Millions of devotees on the coast of Ghana and Togo look to animist deities for guidance.
Bowhead Whales: Leviathans of Icy Seas
Decimated by centuries of commercial hunting, 8, 000 bowheads swim in northern waters. Their comeback off Alaska allows Eskimos to maintain a traditional hunt for food.
Hiroshima { Up From Ground Zero: Hiroshima}
After fifty years, ground zero is alive with heavy industry and cosmopolitan shopping malls – – and with memories of those who perished in the world’s first atomic bombing.

Be the first to review “National Geographic August 1995” Cancel reply 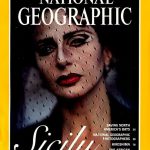