Tektite II { All- Girl Team Tests the Habitat}
Five female scientists eat and sleep in the underwater habitat, Tektite II, while conducting scientific work underwater for 14 days.
Oklahoma, the Adventurous One
Where pioneers once trod, oil now flows. Residents of the 46th state transform their stubborn land into an agricultural and industrial giant, connected by rivers and channels to the sea.
Help for Philippine Tribes in Trouble
As settlers, miners, and lumbermen try to seize tribal lands in the highlands of Mindanao, the Philippine government acts to protect national minorities.
Tektite II { Science’s Window on the Sea}
Tektite II, an underwater habitat moored off St. John in the U. S. Virgin Islands, provides housing for divers who work at depth for 20 days at a time. Their dual mission: to survey the sea frontier and prepare for journeys into space.
What’s So Special About Spiders?
Feared and maligned, the world’s spiders destroy many times their number in insects and continue to fascinate scientists.

Be the first to review “National Geographic August 1971” Cancel reply 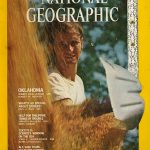