Carnival in Trinidad
For 48 hours before Lent, revelers in elaborate costumes transform Port of Spain into an extravaganza.
Antarctica’s Nearer Side
The author spent 50 days aboard the U. S. vessel Hero, visiting research stations that are studying how wildlife adapts to cold.
The People of Cumberland Gap
Free- spirited and self- sufficient descendants of European pioneers who streamed into the Kentucky frontier make due on land ravaged by strip- mining and logging.
First Photographs of Snow Leopards in the Wild { Imperiled Phantom of Asian Peaks: First Photographs of Snow Leopards in the Wild}
Nocturnal and solitary, one of the rarest of the great cats is spotted in a private hunting preserve in Pakistan.
Uganda, Africa’s Uneasy Heartland
Moving out of a colonial past, the landlocked country attempts to weld a Christian majority with varied minorities into nationhood.
Karnali, Roadless World of Western Nepal
An American geographer and his family adapt to the daily life of Hindu and Buddhist villagers in the Himalaya.

Be the first to review “National Geographic November 1971” Cancel reply 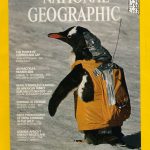