Saint Stephen’s Fete in Budapest
The ringing of church bells, a holiday market bursting with goods, and nobles and peasants dressed in bright costume are all part of Saint Stephen’s Fete – – the Hungarian festival honoring the country’s former king, crowned in Budapest in A. D. 997.
Flashlights from the Jungle
German adventurer C. G. Schillings went to East Africa for the animals, but not to hunt them. Over several years Schillings took rare photographs of giraffes, zebras, elephants, and other big game, capturing the creatures as they live.
Mexico- -The Treasure House of the World
Rich in mineral deposits, Mexico is the top producer of silver, with gold and copper production not far behind.
Saving the Forests
Editor of the U. S. Forest Service Herbert Smith reviews the history and benefits of the U. S. forest reserves in the West and stresses the urgency of taking similar measures east of the Mississippi.

Be the first to review “National Geographic August 1907” Cancel reply 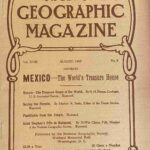