Home- Making by the Government: An Account of the Eleven Immense Irrigating Projects to be Opened in 1908
America’s stability, progress, and national pride are firmly rooted in the ability of her citizens to own land. With available land becoming scarce, the government is at work on massive reclamation projects to provide more space for the nation’s growin
Medieval Tales of the Lop Basin in Central Asia
The 12th- century letters of Prester John describe fantastic scenes in the realm of a Central Asian Christian prince. Prester John himself is regarded as semi- mythical, however, a visit to the Lop Basin shows that the author of the letters had substanti
Hawaii for Homes
Hawaii’s future prosperity will be due to the fact that here is found as possibly nowhere else on the face of the globe. .. all that goes to make perfect home conditions. In addition to outstanding climate and scenery, island landowners may easily produ
The Key to the Pacific
A United States senator calls for dramatically increased fortifications at Pearl Harbor, noting that Hawaii is absolutely essential to the defense of America’s Pacific coast and the nation’s increasingly vital Pacific commerce.
Why Nik- ko Is Beautiful
Nik- ko showcases the unique beauty of Japan, born of earthquakes and volcanoes. Long curving mountain slopes spawn beautiful waterfalls and cascades, dark canyons, and crater lakes in this region where Japanese journey to visit religious shrines and med
Along the Old Inca Highway
A journey to Cuzco, the ancient Inca capital, provides the author a firsthand look at the harsh lifestyle of the mighty empire’s descendants – – the Quichua people.

Be the first to review “National Geographic April 1908” Cancel reply 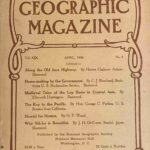