Arctic Expeditions Commanded by Americans
By no means the only country undertaking Arctic expeditions, the United States nonetheless boasted a substantial number of hardy explorers willing to go up against the ice in the race to the North Pole.
Seventy- Five Days in the Arctics
The author recounts his traveling party’s 1906 summer voyage to the Arctic Circle aboard the barkentine Laura. The group was kept from their final destination, Greenland, by ice and fog.
Nearest the Pole
Proud of America’s position as a polar exploration leader, Commander Robert E. Peary lauds the scientific achievements of U. S. Arctic expeditions.
Map of the North Polar Regions
Of historical as well as geographic value, the North Polar region map accompanying this issue references points of discovery, exploration routes and explorer’s achievements.
Peary’s Twenty Years Service in the Arctics
Commander Robert E. Peary devoted over two decades of his life to Arctic exploration, becoming a hero and a household name in the process. A. W. Greely chronicles Peary’s years of service and his tireless efforts to reach the North Pole.
No Man’s Land- -Spitzbergen
The Spitzbergen archipelago is literally a no- man’s- land, much argued over but ultimately unclaimed by either Norway or Sweden. Nonetheless it has little trouble luring visitors, especially those interested in reindeer hunting.
The East Indians in the New World
Transplanted to the West as indentured laborers, East Indians brought their culture, religion, and dress to the West Indies and Guianas. Once free of their obligations, many stayed.
Some Recent Instances of National Altruism: The Efforts of the United States to Aid the Peoples of Cuba, Porto Rico and the Philippines
Secretary of War William H. Taft reviews U. S. involvement in Cuba, Puerto Rico, and the Philippines. While acknowledging some degree of national self- interest, Taft also cites overwhelming sympathy for those countries’ oppressed peoples as the primary
North American Indians
Photographer Edward Curtis records the lives of North American Indians in a fascinating pictorial history. Ultimately spanning nine years of work, the photographs cover a myriad of tribes, including the Hopi, Apache, Navajo, Seminole, Crow, Mohave and Zu
Ninth International Geographical Congress, Geneva, Switzerland, 1908
Details regarding the International Geographical Congress are discussed and individuals planning to submit papers are urged to do so by November 1907.

Be the first to review “National Geographic July 1907” Cancel reply 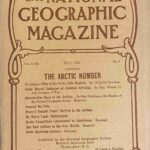