Location of the Sir John Franklin Monument
The Sir John Franklin Monument is located on Beechey Island, not on King Williams Island as originally reported in the January 1908 edition of NATIONAL GEOGRAPHIC magazine.
The Pacific: The Most Explored and Least Known Region of the Globe
A full exploration of the vast Pacific Ocean is among the greatest undertakings still awaiting science. Of particular interest are the origins of various Pacific islanders, which may shed light on the evolution of the human race itself.
Further Notes on Dutch New Guinea
Explorations in remote Dutch New Guinea provide insight into the ancient social structures, artistic ingenuity, and religious beliefs adhered to by the region’s inhabitants.
Biskra, the Ziban Queen
Deep in the French Sahara lies Biskra, an enchanting oasis of bustling markets, Moorish cafes, and scenery that leaves an almost biblical impression.

Be the first to review “National Geographic August 1908” Cancel reply 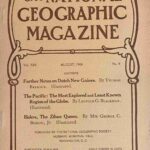