Ore- Boat Unloaders
Performing what was once a job for 50 men, electric ore- boat unloaders require only three operators. The bulky but efficient machines help revolutionize the iron- ore market, saving countless hours of labor and slashing overhead costs.
Factors Which Modify the Climate of Victoria
Graced with comparatively mild winters and cool summers, Victoria, British Columbia, benefits from a unique combination of geography and climate that places it among the most temperate cities in the world.
The Rock City of Petra
Carved from the multihued sandstone walls of the Edom mountains, the rock city of Petra in Jordan stands as a testament to a lost focal point of Arabic culture, replete with temples, tombs and an open- air theater.
A Vigorous Oil Well
Nitroglycerine explosives, detonated from within an oil well, open up the surrounding sand and increase production. As indicated by the accompanying photo, the blast frequently created an initial geyser of black gold as well.
The Revolution in Russia
William Eleroy Curtis recounts recent Russian history – – the demise of the autocracy, rampant political corruption, and the rise of the peasant class – – all contributing factors to the socialist revolution.
Reclaiming the Swamp Lands of the United States
With the success of reclamation efforts in arid areas and an ever growing population in search of agriculturally viable tracts, inhabitants of more humid regions look to the government for help in turning swampland into farmland.
The Black Republic- -Liberia
The West African republic of Liberia boasts a native population of approximately two million. However, government is in the hands of the country’s roughly 15, 000 black settlers, many of them American born and survivors or descendants of slavery.
Echoes of the San Francisco Earthquake
Panic and confusion in the wake of San Francisco’s devastating 1906 earthquake gave rise to false rumors of destruction and general misinformation. Here, the exaggerations are separated from the truth.
Some of Our Immigrants
Still clad in their native garb, newly arrived immigrants to the United States pose for photographs.

Be the first to review “National Geographic May 1907” Cancel reply 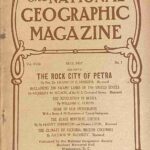