Famers feel betrayed by the climate.

Drouts and deluges could stir up political unrest.

The Woman Who Would Be King

Why did Hatshepsut decide to rule Egypt as a man?

The faithful search for a new, post-Soviet identity.

Scientists race to save them from threats.

Be the first to review “National Geographic April 2009” Cancel reply 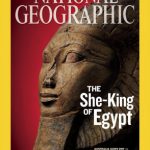