Calcutta, India’s Maligned Metropolis { Why Is It That Calcutta- -the World’s Most Maligned Metropolis- -Is Where So Many People Want To Be? }
India’s largest city and one of its richest centers is where India’s people want to be – – even if they have to sleep on the street.
The American Lobster, Delectable Cannibal
Overfishing, increasing consumption, and pollution threaten the big- clawed crustacean of North America’s Northeast coast.
Pennsylvania’s Old- time Dutch Treat
At the Kutztown Folk Festival descendants of German and Swiss Protestant immigrants pay tribute to the arts and crafts of their forebears.
Madeira, Like Its Wine, Improves With Age
Portuguese islands off the northwest coast of Africa specialize in flowers, embroidery, wickerworks, and wine.
Those Outlandish Goldfish!
Over the centuries East Asian fish fanciers bred garish mutations of the common goldfish into bizarre variations now finding favor in the West.
John Muir’s Wild America
On long- distance rambles this apostle of wilderness studied nature at close range from Appalachia to Alaska, and throughout the Sierra Nevada. His ideas encouraged the creation of the National Park Service.

Be the first to review “National Geographic April 1973” Cancel reply 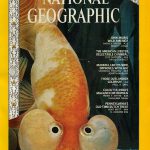