Hays, Kansas, at the Nation’s Heart: Plains Where Indians, Gun- toting Sheriffs, and Buffalo Roamed Now Shape an Empire of Wheat, Cattle, and Oil
Hays, Kansas, is in the geographic center of the United States. On these great plains, where the buffalo once roamed, has arisen an empire of wheat, cattle, and oil.
New Zealand, Pocket Wonder World
New Zealand’s varied climate and colorful landscape support a variety of enterprises, where white and Maori work together in harmony.
Portsmouth, Britannia’s Sally Port: From King Alfred to the New Queen Elizabeth, British Fleets Have Fared Forth from This Citadel of Sea Power
Portsmouth is the historic home of the British Royal Navy. From this harbor, fleets have set sail for 1, 600 years.
Sheep Trek in the French Alps
To avoid the summer heat, flocks of sheep migrate from flat, sea- level grazing lands to pastures high in the French Alps, a trek of 8, 000 feet and 13 days.
The Fur Seal Herd Comes of Age: Every Year a Million Mighty Swimmers and Half a Million Young Bring Drama to the Lonely Pribilofs
The Pribilof fur seal herd has come back from the brink of extinction, thanks to a treaty signed by the United States, Great Britain, Russia, and Japan. These fur seals return to the Pribilof beaches each year to give birth to their young.

Be the first to review “National Geographic April 1952” Cancel reply 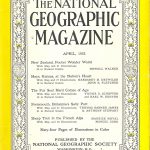