The Vienna Treasures and Their Collectors
The Vienna treasures consist of paintings, sculpture, armor, tapestries, and jewels, assembled by the ruling Habsburg dynasty over four centuries.
Roaming Korea South of the Iron Curtain
The arbitrary division of Korea at the 38th parallel began as a military expedient for disarming Japanese troops, but it has turned into a rigid political barrier between the industrial, communist north and the agricultural, democratic south. The author;
Lightning in Action
Though lightning is feared for its destructive power, scientists are learning to harness its energy potential for practical use.
Montana, Shining Mountain Treasureland
Montana, according to its residents, has everything except skyscrapers and high hats. Leo A. Borah finds it does have incredible scenery, mineral wealth, rodeos, cowboys, and a few city slickers, just for contrast.

Be the first to review “National Geographic June 1950” Cancel reply 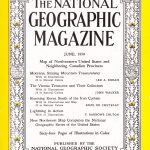