The Dawn of Humans: Tracking the First of Our Kind
Around 117, 000 years ago in southern Africa an early member of our species left footprints in a sand dune. Could it have been the Eve some scientists are seeking?
A Dream Called Nunavut
In 1999, Canada’s Inuit will land their greatest catch – – 770, 000 square miles to call their own.
Balloon Challenge { Racing With the Wind}
Competitors from three nations last winter attempted the first nonstop girdling of the globe by balloon.
Route 66 { Romancing the Road}
Rattling through Arizona, this remnant of a historic highway returns travelers to two- lane America and the auto’s golden age.
China’s Three Gorges: Before the Flood
The world’s mightiest dam is rising on the Yangtze River. Gains: electric power and flood control. Losses: wild canyons and hundreds of thousands of homes.
Beirut Rising
A war- torn ruin after 15 years of civil strife, Lebanon’s capital is rebuilding itself physically and socially.
The Siren Song of Everest
Amateurs crowd the perilous slopes of earth’s highest mountain, seeking the adventure of a lifetime.

Be the first to review “National Geographic September 1997” Cancel reply 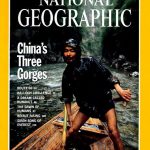