Opening a Boxful of History { U. S. History in a Box: A Bygone Century Comes to Light; A Bygone Century Comes to Light}
A metal- sheathed box of family memorabilia relating to the centennial of George Washington’s first inauguration is opened after a hundred years, revealing contents that prove the accuracy of a preliminary high- tech see- through. Robert M. Poole report
Retracing the First Crusade
Heeding the call of Pope Urban II to reclaim the sacred places of Christendom from infidels, Godfrey of Bouillon and thousands of followers set out from northern Europe in 1096. Tim Severin travels more than 3, 000 miles by horseback along their route –
The Shakers’ Brief Eternity
At their 19th- century crest, the Shakers numbered 4, 000 believers who lived a communal life devoted to achieving spiritual perfection. Though fewer than a dozen members remain, the purity of their faith and the simple beauty of their workmanship endure
Samurai Aphids Defend Their Kind { Samurai Aphids: Survival Under Siege}
Within a placid and unobtrusive insect group, some aphid species of the Orient produce an aggressive soldier caste to defend the colony or die trying. Their horned helmet- like heads remind zoologist Mark W. Moffett of ancient Japanese warriors.
Himalaya Sanctuary { A Sanctuary for the Himalaya; Annapurna: Sanctuary for the Himalaya}
Amid the breathtaking beauty of Nepal, an innovative nature preserve safeguards the fragile environment. Involving the local people is the key to its success, says author- photographer Galen Rowell.
Malawi: Faces of a Quiet Land
Paul Theroux returns to the scene of his Peace Corps service to find octogenarian president- for- life Dr. Hastings Kamuzu Banda keeping his African nation from the political turmoil and economic desperation that afflict its neighbors. Photographs by Eli

Be the first to review “National Geographic September 1989” Cancel reply 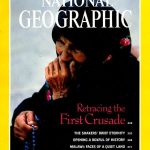