Periscope on the Etruscan Past
Italian scientists probe hundreds of underground tombs with this camera- equipped tube, finding many graves looted but some untouched for 2, 500 years.
Miracle of the Mermaid’s Purse
A mysterious black object commonly found on Atlantic shores of the southern United States, turns out to be the egg case of the clearnose skate.
Firsthand Look at the Soviet Union
An American professor reports on the country he has long studied but only recently been allowed to visit.
The Society Reports to Its Members on Russia Today
The Editor explains why the magazine has chosen to focus on this communist country so little known outside its expansive borders.
Good- Will Ambassadors of the U. S. Navy Win Friends in the Far East { Pacific Fleet: Force for Peace}
The U. S. Navy spreads American goodwill across a third of the world.

Be the first to review “National Geographic September 1959” Cancel reply 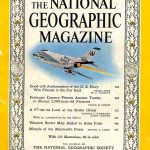