Portrait of Indochina
The civil war in Indochina ( Vietnam, Laos, and Cambodia) rages on. Twenty- one paintings by Jean Despujols give a geographic and human portrait of this embattled land.
Perfume, the Business of Illusion
Behind the latest trendy scent or the classic Chanel No. 5, is an army of perfumers, manufacturers, flower growers, chemists, and noses. Their expertise is combined in an industry that circles the globe.
Yosemite National Park
Photographs capture the scenic wonders found in Yosemite National Park.
Growing Pains Beset Puerto Rico
Puerto Rico’s language and culture remain primarily Spanish, but its people are citizens of the United States. This duality expresses itself in many ways, as the island copes with an expanding economy and an influx of tourists.
Alaska’s Russian Frontier: Little Diomede
With the start of the Cold War, the Eskimos of Little Diomede island, are cut off from their relatives and friends on Big Diomede, which is Russian territory.
Holy Week and the Fair in Sevilla
The piety and gaiety characteristic of Spain are at their fullest during the Holy Week processions before Easter and through the Spring Fair that follows.

Be the first to review “National Geographic April 1951” Cancel reply 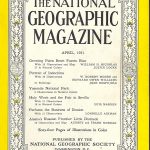