Indochina Faces the Dragon: France and Her Former Protectorates Fight Side by Side to Stem the Menace of Communist Forces in Southeast Asia
As the civil war in Indochina heats up, France and her former colonies fight side by side to stem the tide of the communist advance.
Giant Effigies of the Southwest
The effigies etched into the ground near Blythe, California, can be seen only from the air. Their origin is unknown.
Nature’s Clown, the Penguin
Scientists have identified from 17 to 22 living species and races of penguins, native to the Southern Hemisphere.
Jungle Jaunt on Amazon Headwaters: Foaming Rivers Led a Lone White Woman to Remote Clearings Where Primitive Indians Peered at Her in Wonder
The author and her Indian guides traveled through the remote jungle of Colombia and Brazil. She was the first white woman many of the natives had ever seen.
Seeking the Secret of the Giants: A Flying Archeologist Attacks the Mystery of Strange Figures, Visible as a Whole Only from the Air, Outlined on Desert Mesas
Giant figures, visible only from the air, bask in the sun of the California desert. The author proposes that they were the work of Yuman- speaking people, constructed as memorials to characters from tribal myths.
Down East Cruise: [ Nomad] Sails Along Maine’s Rocky, Tree- clad Coast, Home of Yankee Lobstermen, Salty Fishermen, and Blue- water Sailors
The Nomad sails along the rocky coast of Maine, home of Yankee lobstermen, salty fishermen, and blue- water sailors.

Be the first to review “National Geographic September 1952” Cancel reply 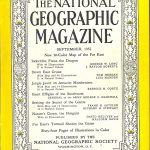