Hallowed Ground: The Future of Parks { Places We Must Save: World Parks at Risk; Parks; Nothing Is Ever Safe}
The world needs parks. Whether they’ re slivers of green in a crowded city or 20, 000 square miles of designated wilderness, parks nourish the human spirit, help sustain the planet, and reflect the ideals of the societies that protect them. But for some
Hallowed Ground { Parks; City Parks: Space for the Soul}
City Parks: Space for the Soul BY JENNIFER ACKERMAN
Hallowed Ground { Paris: Space for the Soul; Parks; Urban Downtime}
Urban Downtime PHOTOGRAPHS BY AMY TOENSING
Hallowed Ground: The State of U. S. Parks { Parks; Threatened Sanctuaries}
Threatened Sanctuaries BY JOHN G. MITCHELL
Hallowed Ground: The Future of Parks { Parks; An Endangered Idea}
An Endangered Idea BY DAVID QUAMMEN
The Chemicals Within Us { The Pollution Within}
Modern chemistry keeps insects from ravaging crops, lifts stains from carpets, and saves lives. But the ubiquity of chemicals is taking a toll. Many of the compounds absorbed by the body stay there for years- and fears about their health effects are grow
Mexico’s Pyramid of Death { Pyramid of Death}
At the Pyramid of the Moon in central Mexico, humans and animals were buried alive. Excavations reveal the remains of sacrifices once witnessed by thousands of spectators. BY A. R. WILLIAMS PHOTOGRAPHS BY JESUS EDUARDO LOPEZ REYES
Hallowed Ground: A Report Card { America’s Threatened Sanctuaries; Parks; Our National Parks in Peril}
Our National Parks in Peril PHOTOGRAPHS BY MICHAEL MELFORD

Be the first to review “National Geographic October 2006” Cancel reply 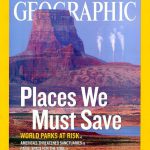