New Nations in the Pacific { New Pacific Nations; At the Birth of Nations: In the Far Pacific}
A U. S. trust transforms itself into three new countries and a commonwealth, with America as godparent. Carolyn Bennett Patterson investigates the metamorphosis of these far- flung islands. Photographs by David Hiser and Melinda Berge.
The Dutch Touch
The people of the Netherlands successfully cope with problems that might swamp a larger nation with a less practical aapproach. By Bart McDowell, with photographs by Nathan Benn and Farrell Grehan.
Scotland’s Deer of Rhum { Studying Scotland’s Red Deer; Red Deer: A Scottish Dynasty}
Dr. Clutton- Brock describes a 14- year research effort on the isle Rhum.
Wall Against the Sea { Man Against the Sea, the Oosterschelde Barrier}
The Dutch cap an ambitious 30- year engineering project with the giant Oosterschelde surge barrier to protect a major estuary. Larry Kohl tell how it will work.
Red Deer: The Ancient Quarry { Red Deer and Man}
Whether the prize of an English hunt or the product of a New Zealand farm, red deer have long been important to man. British zoologist T. H. Cluton- Brock assesses their global status today; photographs by Jim Brandenburg.
Are the Soviets Ahead in Space? { Soviets in Space- -Are They Ahead? ; A Generation After Sputnik. .. Are the Soviets Ahead in Space? }
Methodically building on experience, the U. S. S. R. boasts an ambitious space program that in some repects surpasses our own. Science editor Thomas Y. Canby reports.

Be the first to review “National Geographic October 1986” Cancel reply 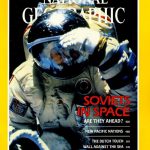