Exploring the Secrets of Persepolis
Deep in the Persian desert, excavations of the ancient city of Persepolis reveal colossal statues, cuneiform tablets, and an elaborately carved staircase.
Andorra- -Mountain Museum of Feudal Europe
Squeezed among the Pyrenees mountains between France and Spain, Andorra operates under an unusual, antiquated government while its few thousand residents wrangle a living from the land with few modern conveniences.
Life on the Argentine Pampa
Mix a cross section of European lifestyle with a Texas- like climate to taste the frontier flavor of these South American plains.
Chosen- -Land of Morning Calm
On her second visit to Korea, Mabel Craft Deering notes the changes wrought under Japan’s control and recounts tales from Korean history.

Be the first to review “National Geographic October 1933” Cancel reply 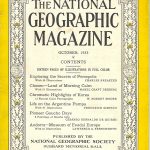