Skypaths Through Latin America: Flying From Our Nation’s Capital Southward Over Jungles, Remote Islands, and Great Cities on an Ae?rial Survey of the East Coast of South America
A flight from Washington, D. C. to Buenos Aires by way of the Caribbean, and a route over the Amazon River Delta offer views of sights impossible to see from a car, boat, or train.
Pursuing Spanish Bypaths Northwest of Madrid
The region of Galicia, tucked between Portugal’s northern border and the Bay of Biscay, boasts a rugged, verdant landscape unique within Spain.
Hispaniola Rediscovered
Once claimed by Columbus for Spain, the former hub of Spanish influence in the Americas now belongs to Haiti and the Dominican Republic.
Color Contrasts in Northern Spain
Santiago de Compostela’s 13th- century cathedral lures visitors to the north, where a traditional rural lifestyle endures outside the city limits.

Be the first to review “National Geographic January 1931” Cancel reply 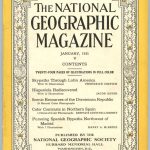