Sailing Forbidden Coasts
An enterprising woman arranges a sea voyage along the coastline of French Somaliland, disguising herself in native costume when ashore to avoid anti- European sentiment.
The Koala, or Australian Teddy Bear
Though cuddly looking as a child’s toy, the koala prefers a solitary existence and does not thrive in captivity.
New Hampshire, the Granite State
A proud New Hampshire senator touts the glories of his state, from the Green of Dartmouth College to the blue waters of Lake Winnepesaukee.
A World Inside a Mountain: Aniakchak, the New Volcanic Wonderland of the Alaska Peninsula, Is Explored
Investigating a massive volcanic crater, a team of geologists encounters lava flows twisted into strange formations and a profusion of plant and animal life.

Be the first to review “National Geographic September 1931” Cancel reply 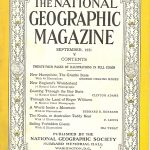