Life Slowly Changes in Remote Bhutan { Life in Bhutan Slowly Changes; Life Slowly Changes in a Remote Himalayan Kingdom}
Returning to one of the world’s most isolated lands, John Scofield finds the Himalayan realm and its 20- year- old monarch moving cautiously into modern times.
Robert Redford Rides the Outlaw Trail { Riding the Outlaw Trail}
Actor Robert Redford and photographer Jonathan Blair follow history’s hoofprints into the hidden corners of a not- so- old West.
The Pipeline: Alaska’s Troubled Colossus
Beset by a frozen land that should not be damaged, by problems that might have been foreseen, and by construction costs that cannot be kept down, the most expensive private project in history creeps toward the day oil will begin flowing south. Bryan Hod;
What’s Happening to Our Climate?
Cooling in the Northern Hemisphere, thawing in the Antarctic. .. shifting rain, snow, and storm patterns. .. ice caps, volcanic dust, air pollution, sunspots – – the myriad forces that change earth’s basic environment are still far from understood. Samu
Laboratory in a Dirty Sky
An instrument- laden balloon carries atmospheric researchers Rudolf J. Engelmann and Vera Simons from Missouri to Indiana in a tide of city- spawned pollution.

Be the first to review “National Geographic November 1976” Cancel reply 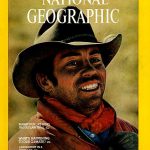